Our Impact On Players & Their Familes 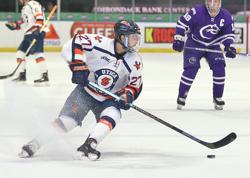 “I would like to say thank you to the whole Whaler organization for giving me this opportunity to play college hockey”, stated Osmundson.  “The Whalers organization strives off of sending players to the collegiate level and that has allowed me to get the training and exposure I need to move on. Without Patrick Cavanagh, this opportunity would never happen. He has helped me become the player I am today on the ice. Countless hours of training with him has boosted my game in so many different ways since I was young. Coach Rod Taylor has also been a tremendous asset to me by teaching me so many different aspects of the game that he learned while playing Division 1 and pro.  Coach Brad Jones has always been there for me since I was a mite though my junior career. He has mentored me like a little brother and has made sure I was ready for any obstacle in my way. Coach Kody Rodriguez has been a blessing to the organization since joining the coaching staff. After practices he was always out there helping any players that needed extra help and has brought so many different skill attributes that I use in every single game. Power Skating coach Suzie Hewitt has trained me since i was 11 years old.  Without her help, I wouldn’t be the skater I am today. She has helped me become a great skater on the ice and there’s no other coach out there like her. I could go on and on about how many great things the Whaler organization has provided for me. This is by far the best junior program out there and I can’t wait to start the next chapter in my career, playing for the Utica Pioneers.” 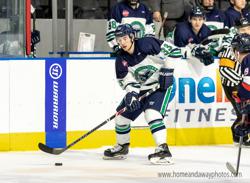 "Being able to play for the Hampton Roads Whalers, the best Tier 3 Junior Hockey organization kind of explains itself. I got this opportunity in mid January and it was basically a no-brainer to come play for them. It definitely meant a lot to me that this prestigious team wanted me to come play for them. Though the decision to leave the South Shore Kings came with some difficulty, especially since I was their captain and played for them for the past year and a half, all players know that playing junior hockey prepares you for the next step, college hockey. I knew the Whalers could and would assist me with that. Along with playing on the back to back USPHL Premier Champions I would be getting the opportunity to play along with a future teammate of mine at the college level next year before actually attending.  I knew if I needed to better myself for the future and a chance to win a National Championship it was going to be with the Whalers. Coming to the Whalers was one of the best decisions I made in my hockey career, everyone welcomed me with open arms and didn’t take long to fit in. Even though the outcome wasn’t what we were hoping for with the abrupt ending due to the pandemic crisis and wasn’t the way I pictured my junior hockey career to end, I believe coming to the Whalers has prepared me for my next step in my hockey career at SUNY Morrisville State College." 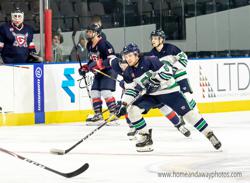 "Playing for the Whalers you are expected to perform at a high level on and off the ice and I’m looking forward to taking this mindset to Neumann. I want to thank Mr. Cavanagh, Coach Gatto, Coach Rodriguez, and the rest of the Whalers staff for making this dream a reality”. 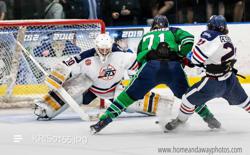 "I’m excited for the opportunity to play for New England College", stated McGeever.  "I want to thank the entire Whalers Organization and community for the opportunity they provided me this past season. The guidance of Patrick Cavanagh, Coach Gatto, and Coach Rodriguez has had a huge impact on my hockey career and I can not thank them enough. Without them, my parents, my billet family and the boys pushing me everyday, I would not have developed as much as I did. I’m ready to take the next step forward and I’m thankful that Coach Carroll is giving me this opportunity"!

“The best decision I ever made for my hockey career was leaving my team in Canada to come and play for the Hampton Roads Jr. Whalers"

“Over the course of two seasons I grew more as a player and as a person than I thought was possible. The scouting in the USPHL was incredibly impressive, and our GM Patrick Cavanagh is the best GM I've ever had for helping players move on to a higher level. My coaches Rod Taylor and JJ Crew were amazing, they taught and allowed me to grow as a player and ultimately helped me get to the next level. My teammates were like brothers to me and I'll always think of them as my teammates and family.  It was an honor for me to play for such an amazing, player promoting organization and I'm proud to say I'll always be a Hampton Roads Jr. Whaler.” 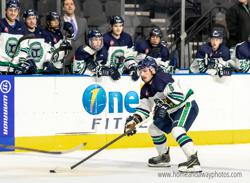 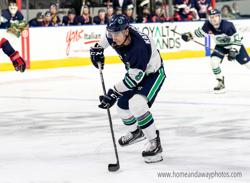 “Whaler Nation has always been home to me”, stated Kaplan.  “Ever since I arrived here it was all about family.  I love every last guy that I’ve sat in that dressing room with, they’ll be my brothers for life. I’ve been fortunate enough to win two championships here, making memories with guys that’ll last forever.  The work isn’t done yet, I still have a little bit of junior hockey left in me.  I’m ready to give it everything I have to end this year with the boys and make it special. Let’s go Whalers!! Let’s go Mustangs.”