Whalers Get Weekend Split in Tough Road Series in Carolina

The Whalers wrapped up a 8 game road stretch this past weekend in Carolina as the boys toughed out a road split in a series that lived up to its billing against a tough Carolina team.

The Whalers Elite team had a tough time gaining traction on Saturday night as Carolina came out fast and physical, looking to avenge a sweep in Hampton Roads in September.  After a scoreless opening frame, the Eagles would open the scoring at 13:27 of the 2nd period, converting on a rebound in front.  With less than 2 minites left in the 2nd, the Whalers had a power play chance to tie the game, but it was the Eagles finding the shorthanded marker to go up 2-0.  With just 2 seconds left in the period the Whalers would draw within one, but were unable to find the net in the 3rd and fell 2-1.

Carolina held a 31-24 shot on goal advantage.  The Whalers finished 0 for 4 on the power play while Carolina was 0 for 3.

The fight for the top spot in the USPHL Premier Southeastern Conference heated up this weekend as the 1st place Eagles held a 2 point advantage on the 3rd place Whalers.  On Saturday both teams exchanged 1st period goals as the game would go 1-1 into the locker room.  In the middle frame the Whalers power play would give them a 2-1 lead just about 2 minutes in and a goal with under 5 minutes left gave them a 3-1 lead into the locker room.  In the 3rd, the Whalers would score just :48 seconds in and again in the final 2 minutes for a 5-1 win.

The Whalers held a 37-29 shot on goal advantage.  Hampton Roads went 2 for 7 on the power play while Carolina was 0 for 3.

The Whalers held a 50-25 shot on goal advantage.  The Whalers finished 2 for 10 on the power play while Carolina was 2 for 5.

On Sunday, the Whalers didn’t have the same jump, as the Eagles controlled most of the first 2 periods of play.  Carolina took a 1-0 lead 7 minutes into the 1st before the Whalers tied it 1-1 late in the frame.  In the 2nd, the Eagles got a power play goal with under 5 minutes to play to take a 2-1 lead into the intermission.  In the 3rd, Carolina scored just under 4 minutes into the period to go up 3-1.   The Whalers continued to push, narrowing the lead to 3-2 at 8:39, but the continued offensive onslaught in the 3rd period wasn’t enough as the Whalers fell 3-2, losing for just the second time this season.

Hayden Knight and Matthew Hanchon each scored once for the Whalers.  John Horn, Zach Zalar, Conner Hunt, and Adam Toor each had 1 assist.  Zach Alvarado suffered his first loss of the year in goal with 22 saves.

The Whalers held a 34-25 shot on goal advantage.  Hampton Roads finished 2 for 6 on the power play while Carolina was 2 for 5.

After 8 games and more than a month on the road, the Whalers finally return home as they face off with the Potomac Patriots this weekend.

Baker Street will before performing live before the Premier game and during the intermission.  Tickets are just $10 for the weekend at the door.  All youth players get in free when you wear your jersey.  If you can’t make it out, catch all the action live online in HD on HockeyTV. 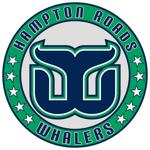 The Whalers have signed 1998 defenseman Jake Leone from Bohemia, NY.  Jake will wear #5.

The Whalers have signed 1997 defenseman Riley Wagner from Washington, IL.  Riley will wear #3.

Forward John Moncovich returned from his stint with the Minnesota Wilderness in the NAHL and will return to the line-up this weekend against Potomac.