Whalers Sweep Potomac on the Road 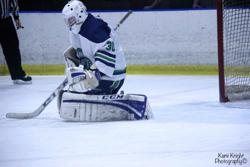 The Whalers continued their 8 game road trip this past weekend in Potomac with a match-up with the Patriots.  The Whalers Elite team came out flying in game 1, out shooting the Patriots 17-5 in the opening frame, but were unable to solve Patriots goalie Jared Cable and the teams went into the intermission scoreless.  The shooting gallery continued in the 2nd period, as the Whalers held a 16-6 advantage in the middle frame, and were able to connect twice to take a 2-0 lead into the 3rd.  In the final period, the Whalers kept the pressure on and added an empty net marker to take the 3-0 win.

Ryan Lorenz scored twice, Gary Eastlack tallied once.  Justin Jiang had 2 assists while Cooper Gravel had 1.  Jason Horn turned away 19 Patriots shots for his 4th win and 1st shutout of the season.  Jared Cable turned away 44 shots for his efforts in net for Potomac.

The Whalers dominated the shot board by a count of 47-19.  The Whalers finished 1 for 3 on the power play while Potomac was 0 for 5. 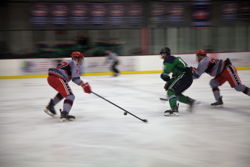 Game 1 of the weekend for the Whalers Premier team was a tight checking affair after 20 minutes as the teams skated 1-1 after the 1st.  In the 2nd period, the floodgates opened, as the Whalers connected 6 times to blow the game wide open and take a 7-1 lead into the 2nd intermission.  In the 3rd, the Whalers connected twice more to make it 9-1 before the Patriots added a late goal to make the final 9-2. 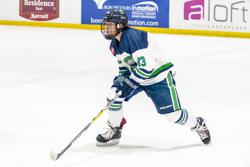 In game 2 of the weekend, the Whalers started fast, jumping out to a 1-0 lead just under 2 minutes into the contest.  The Whalers continued to keep the pressure on, notching 14 shots in the opening period but again Cable was strong for Potomac and kept the score 1-0 after 1.  Then penalties became a major issue, as the Whalers were given 18 minutes of penalties, including 2 majors and ejections in the middle period.  Potomac tied the game on the power play with just over 7 minutes left, but the Whalers regained the lead with a shorthanded tally with just 30 seconds left in the frame to lead 2-1 after 2.  The Whalers would control play in the 3rd, blasting another 16 shots on the Potomac net, scoring once and taking the 3-1 win and weekend sweep.

The Whalers held a 40-28 shot on goal advantage, despite 44 minutes in penalties.  The Whalers finished 0 for 4 on the power play while Potomac was 1 for 8.  Noah Kramer and Cody Wilson were ejected for the Whalers.

The Elite team has now won 6 in a row and continues to keep the race for 1st in the division tight, as the Whalers trail Charlotte by 1 point for the division lead with 2 games in hand. 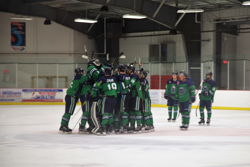 The final game of the weekend brought on a bit of adversity for the Whalers Premier team as a Whalers team who ranks near the bottom of the league in penalty minutes found themselves shorthanded for over half the contest, as the team was hit with 34 minutes in penalties.  The Whalers scored twice in the opening frame, while the Patriots scored once, the Whalers led 2-1 after 20.  The middle period would go scoreless, despite killing off 5 penalties, including a 5 on 3.  In the 3rd, the Whalers were hit with another 5 penalties, and Potomac found the equalizer at 11:03 to send the game into overtime.  In overtime, the Whalers found a way to win, just 1:17 into the frame, Adam Toor carried the troops to a 3-2 victory.

Toor, Jared Sanchez and Nikita Anistratenko scored for the Whalers.  John Moncovich notched 2 assists in the contest, while Adam Toor and Max Loga each had 1.  Zach Alvarado made 30 saves in net for the win.

The Premier team has now won 7 games in a row to tighten the race for 1st in the division as they sit just 2 points behind Carolina and Charlotte who are tied atop the division with 2 games in hand on both. 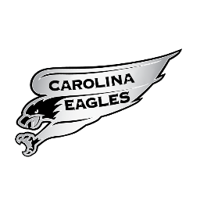 The Whalers will wrap up an 8 game road stretch with a trip to Wake Forest, NC and a match up with the Carolina Eagles at the Factory Ice House this weekend.

1998 forward Brandon Osmundson was recalled to the Odessa Jackalopes of the NAHL.  Osmundson tallied a power play goal Friday night for his 1st goal with the Jacks.

The Whalers have signed 1997 forward Hayden Knight from Las Vegas, NV.  Knight will join the Whalers on the road this weekend in Carolina.

The Whalers have signed 1998 defenseman Jake Leone from Bohemia, NY.