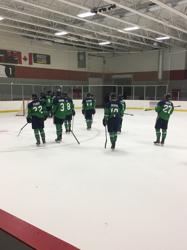 The Whalers held a 28-22 advantage in shots.  Hampton Roads went 0 for 1 on the power play while the Blades were 1 for 5. 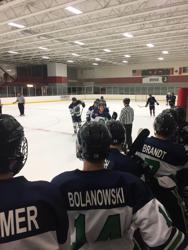 Friday morning saw the Whalers take on a fast Tampa Bay Juniors squad in an 8am start.  It was the Whalers who would carry the play early and often, but found it to be tough sledding against Tampa net minder Perry Giannino, who made 16 saves in the opening half.  The Whalers were able to tally once with just under 10 minutes left in the half and took a 1-0 lead into the intermission.  In the 2nd, Tampa tied things up 1-1 just a minute and a half into the frame.  The game remaind that way until the 10:10 mark when the Whalers retook the lead with a power play goal.  Hampton Roads would score again at 19:59 and add an empty net marker with just 7 seconds left for the 4-1 win. 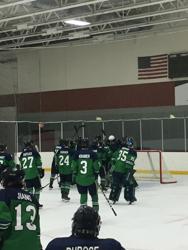 Friday afternoon, the Whalers faced off with a struggling Daytona Racers squad on 4 hours rest between games.  Right away the Whalers realized wins aren’t free, as they found themselves down 2-1 to the Racers over 20 minutes into the 1st half.  The Whalers would make a late push to end the half, scoring twice in just over 2 minutes to take a 3-2 lead into the intermission. The Whalers came out in the 2nd half and scored twice in the first 10 minutes to extend the lead to 5-2 before the Racers got a short handed goal to cut the lead back to 2 goals.  Just shy of the 15 minute mark, the Whalers made it 6-3 and an empty net goal with 34 seconds left would seal the win.

The Whalers held a 54-10 advantage in shots.  Hampton Roads went 0 for 5 on the power play while Daytona was 0 for 2. 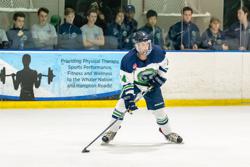 With the win, the Whalers have won 8 of 10, going 8-1-1 to start the season and sit in 2nd place in the USPHL Elite Southeastern Conference, just 1 point out of 1st with 2 games in hand. 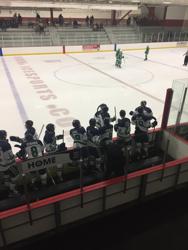 The Whalers Premier team also started the weekend with a match-up against the Florida Jr. Blades Premier team.  The Whalers controlled the play from the drop of the puck, jumping out to a 3-0 lead after 25 minutes of play.  In the 2nd half the Whalers would add 3 more goals, only surrendering one with just :42 seconds left for the 6-1 win.

Nikita Anistratenko had a hat trick, John Moncovich scored twice, while Zach Zalar scored once.  Brandon Osmundson had 4 assists, Matthew Hanchon tallied 3, while Brendon Borg, Brandon Leitz, Jonas Edwards, and Trent Wydrowski had 1.  Sean Dickson made 13 saves in net for the win, coming up just short of his 3rd shutout of the season.

The Whalers held a 33-14 advantage in shots.  Hampton Roads went 1 for 4 on the power play while the Blades were 0 for 3. 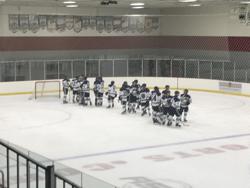 Game 2 of the weekend saw the Whalers square off with the Tampa Bay Juniors.  10 minutes into the 1st half the Whalers jump out to a 2-0 lead.  With just 32 seconds left in the half, the Juniors closed the gap with a power play goal to make it 2-1 at the intermission.  In the 2nd half, the Whalers tallied twice in the early portion of the half and dominated the rest of the way for a 4-1 win.

The Whalers held a 24-11 shot on goal advantage.  Hampton Roads failed to convert on 4 power plays while Tampa was 1 for 2. 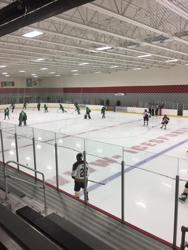 Game 3 of the weekend saw the Whalers Premier team take on the expansion Minnesota Mullets.  The Whalers jumped out to a quick start, scoring just under 2 minutes into the game before the Mullets tied it just 3 minutes later.  5 minutes later the Whalers would re-take the lead and despite a 20-5 edge in shots in the opening half, the Whalers only led 2-1 at the intermission.  The 2nd half would stay 2-1 until just about the 9 minute mark when the Whalers scored twice in about a 5 minute span to go up 4-1 and hang on for the win.

Nikita Anistratenko scored twice, Trent Wydrowski, and Conner Hunt each had 1.  Anistratenko also tallied 2 helpers for a 4 points night, while Conner Hunt also had 2 assists for a 3 point night.  Matthew Hanchon had a 3 assist game.  Sean Dickson made 13 saves in net for his 2nd win of the weekend. 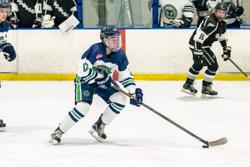 The final game of the weekend saw a match-up with the Ironwood Fighting Yoopers as the Whalers went for the weekend sweep.  The Whalers jumped out to a 2-0 lead in the 1st half, scoring twice in just under 8 minutes and took a 2-0 lead into the intermission.  In the final half, the Whalers would extend the lead to 3-0 less than 5 minutes into the period, but the Yoopers responded 32 seconds later to make it 3-1.  The Whalers would find the net twice more in a span of 4 minutes to take the lead to 5-1 before Ironwood responded at 8:40 to make it 5-2.  That’s all the offense the Yoopers could muster and the Whalers walked away with the win.

Matthew Hanchon scored twice for the Whalers, Nikita Anistratenko, Jonas Edwards, and Adam Toor each had one.  John Horn and Brandon Osmundson each notched 2 helpers, while Conner Hunt, Jonas Edwards, Jared Sanchez, Adam Toor, and Brendan Borg each had 1. Zach Alvarado scored the win in net with 12 saves.

The Whalers held a 62-12 advantage in shots.  Hampton Roads went 2 for 7 on the power play while Ironwood went 1 for 3.

With the win, the Whalers Premier team went a perfect 4-0 on the weekend.  The Whalers have gone 9-1-0 in their first 10 games of the season and sit in 3rd in the USPHL Premier Southeastern Conference just 3 points shy of 2nd with 2 games in hand and 6 points out of 1st with 4 games.

The Whalers continue an 8 game road swing with a trip to DC this weekend and a match-up with the Potomac Patriots at the Prince William Ice Center.